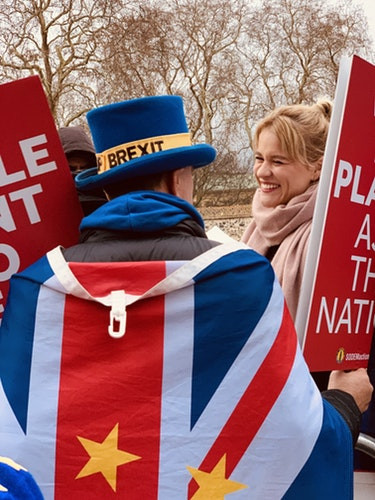 It is hard to think of a larger change management “project” than Brexit when you look at the number of people impacted, the degree or change and the worldwide visibility.  I am not sure I’d want to be leading the project, and neither would anyone else based on the speed of resignations in the UK Government and Opposition.  But here are five important lessons for anyone involved in leading a change project.

1.    We all hate change, but we hate uncertainty more

What is clear is that the only this worse than change, is impending change with uncertainty. So we know change is coming, but have no understanding of the impact or consequences. Rather an employee at a company that has just been acquired, a few days (or weeks) after the acquisition – “Have I still got a job, and if so who am I working for?”.

The graph below of the US / Sterling exchange rate clearly shows the impact of uncertainty of the UKs future. No prizes for guessing the date of Brexit. The slight increase leading up to the date of the referendum was based on the polls suggesting a win by Remain. But the market reacted very badly when it was reported that Leave had won by a small majority. 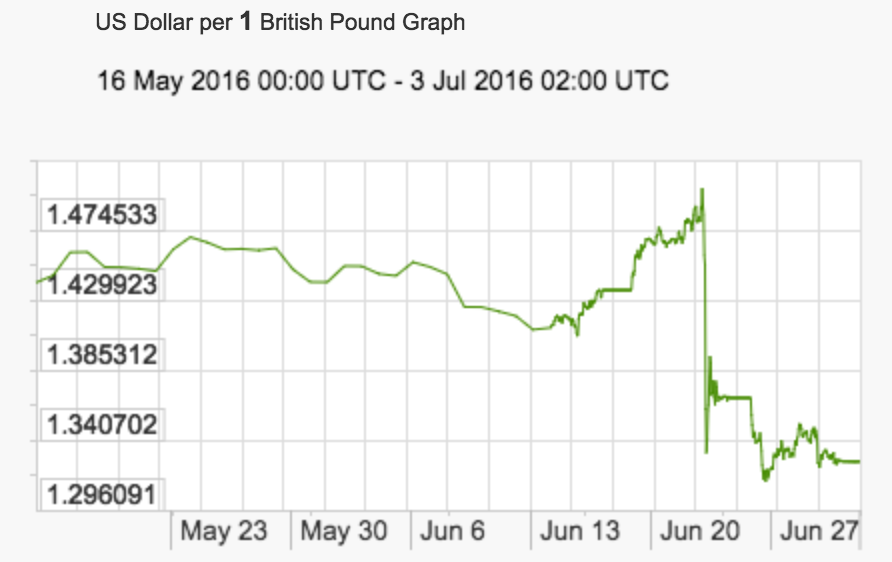 Our job as business leaders or project managers is to get everyone along the performance/change curve as quickly as possible. The curve shows that performance dips immediately after a change, but should then climb as the impact of the changes kick in. So any change program must minimize the drop in performance and get the performance back up above the pre-change levels as quickly as possible. If we use the US/sterling exchange rate as an indicator, then the UK is diving into the dip.  How do you get out of the dip? This leads to the next 3 points. 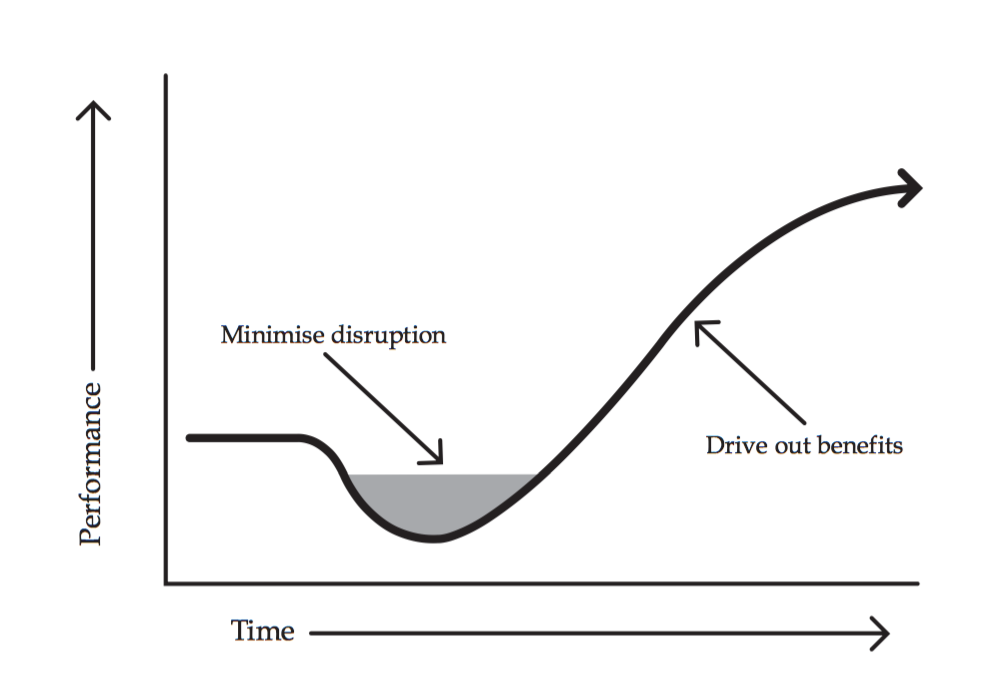 3.    Failing to plan is planning to fail

We recently had a major upgrade to the Elements software.  We had plan with a 26 step process for implementing the change - running enterprise scale cloud software has got complex -  and an 11 step process to roll back if there was a problem. Fortunately, due to a great CTO and dev team, the upgrade went smoothly so we didn’t need the roll-back plan. But that doesn’t mean the plan wasn’t valuable. Plus they now are documented processes in our Process Knowledge app, Elements, for the next release.

The greatest failing of Brexit, and at the heart of the drop in the stock market and exchange rate was a lack of clear plans for what would happen if Leave won.  The Prime Minister, David Cameron, was pinning his colours to the Remain mast. But surely as the leader of the Governement, he had a responsibility to instruct someone in his team to prepare BOTH Remain and Leave plans.  But after losing, instead of staying to deliver on the Remain plan, Cameron resigned. And suddenly the leaders of the Leave vote – Boris Johnson and Michael Gove - were quick to distance themselves from the post-vote leadership.

One senior Conservative MP and Boris Johnson ally reportedly admitted to Sky News that for Vote Leave “there is no plan” for managing the aftermath of Brexit, in the expectation that Downing Street  (the Government) would have made a contingency plan.

Planning in the case of Brexit is more difficult.  There is no blueprint or previous examples to fall back on.  The only other exits have been Algeria, Greenland and Saint Barthélemy, and these were too small to be the basis of any planning.  So it is hard – BUT NOT IMPOSSIBLE.

A plan is a series of related activities with some best guesses of the resource requirements, timing and risk. Within the Government and their advisors they certainly have the knowledge and skills to pull together a plan.

Incidentally, when Scotland recently held a referendum on independence, there seemed to be no planning for how they would operate on their own or the plans for departure; currency, Army, trade relationships, border controls etc etc.  But luckily the Leave vote narrowly lost, so there was no need for embarrassment.

The post-Brexit activity has been the ugly politicking and positioning for leadership of the country – the equivalent of the post-acquisition fight for executive and VP positions.  Watching this saps the morale and trust of the employees, and those who are the top performers will use the time to find jobs in competitors. And everyone else suffers.

If you look for the reasons that change management fails, then Accenture conducted a survey from senior executives in 14 industries. The top 3 answers are below.  Brexit gets a solid 3 out of 3:

There is more than one sort of change – apart from the Brexit “shall we, shan’t we” change. This is discussed in more detail in https://q9elements.com/what-is-your-change-strategy-there-are-4-choices/
The type of change can be analyzed by considering three different factors.

If you then consider the relative importance of each of these three factors together, you identify the most appropriate change strategy, as we have shown in the diagram below. 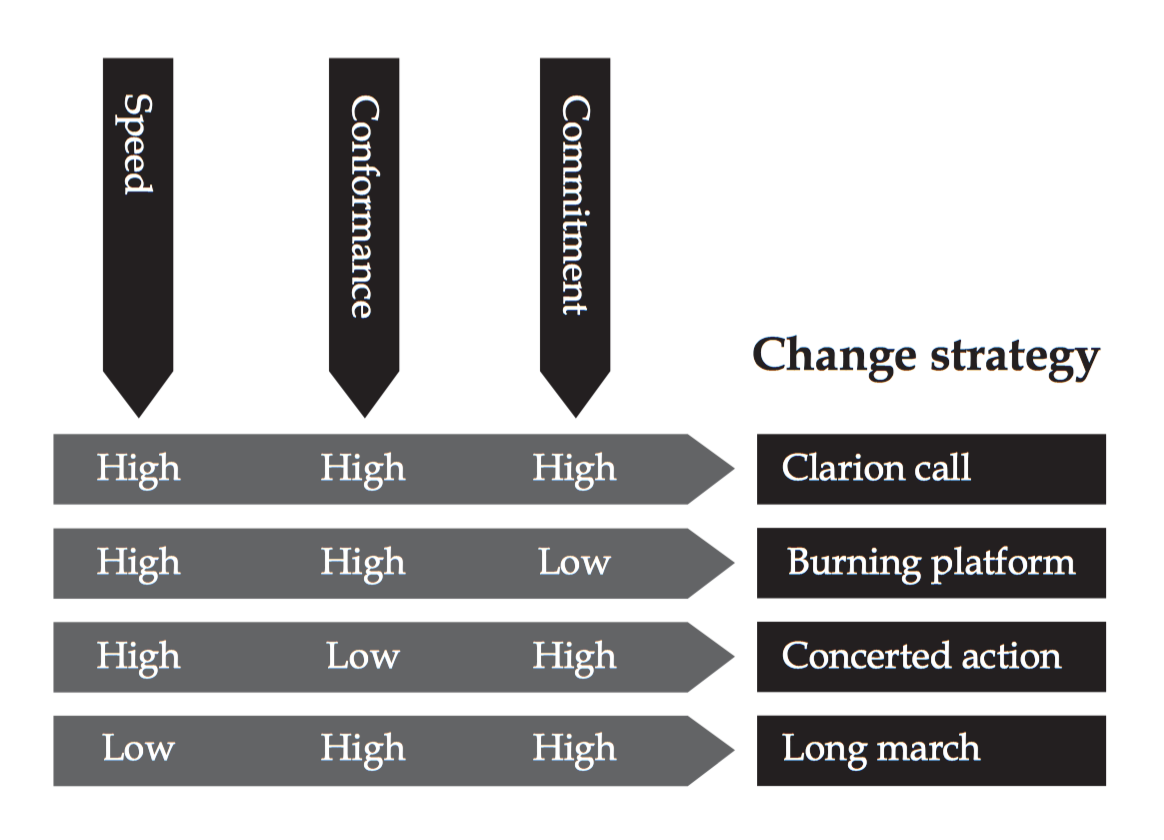 Clarion call: Requires that the change is driven by senior management leadership who show a strong commitment to the change. This is because the need and speed for change are not apparent consistently across the organization.
Burning platform: Everyone already recognizes the need for change. Therefore a clear message about what is required to change is needed. The risk is that the actions from different parts of the organization (in their panic) are uncoordinated and inconsistent.

Concerted action: This requires delegation of the change so that it can be applied autonomously throughout the organization. Yet it still requires the changes to fit within the overall business strategy.
Long march: A long-term initiative which has a strong identity and clear sponsorship from the top so that there is continued commitment to the change. No-one loses sight of the end goal. It also requires clear metrics to show that the changes are working.

When we look at Brexit it is probably “clarion call”.  The result of the referendum was clear. But it is now for the new Prime Minister to lead the country through whatever change is decided, as the referendum is not legally binding.

After planning, the next critical activity is a clear communication of actions and outcomes. When any major change (death, divorce, loss of job, demotion) is inflicted on a person they go through a range of emotions. As they go through the emotions they need a different type of support. 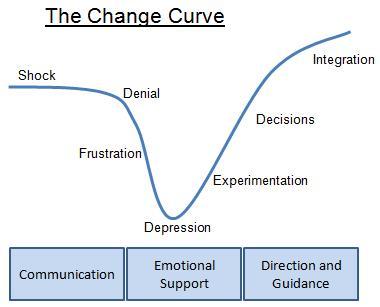 So with Brexit, it is has taken 2 weeks to appoint a new Prime Minister. Although when Cameron resigned, there was talk of a leadership contest through the summer, which further increased the uncertainty. The Prime Ministers first Brexit task was to appoint a Head of the Brexit Ministry. manager). David Davis a hard line Eurosceptic was appointed on 14th which gives a clear message that Brexit means Exit - probably. But first he will need to recruit a team into his new Ministry, take advice and develop a plan. Part of the overall plan will be a communication plan and messaging.  This all takes time so don’t expect any clear and decisive communication for at least a couple of weeks.  And whilst all this is happening the country is moving from Frustration into Depression in diagram above.

The last word: a new term “doing a Brexit”.

Leaving a party without thinking about the consequences i.e. not having the taxi fare home.