In a 1934 paper, Walter Shewhart (the father of Statistical Process Control) defined three types of quality1:

In the same paper, Shewhart pointed out the limitations of these types of quality. Type one is fairly easy to deal with. Some specifications may be set, based on desired quality characteristics, and machines or producing processes controlled to keep the output consistent with those specifications. Type two quality characteristics may also be measured as outputs of systems. These measurements can be tracked using process behavior charts to characterize the Voice of the Process (VOP). 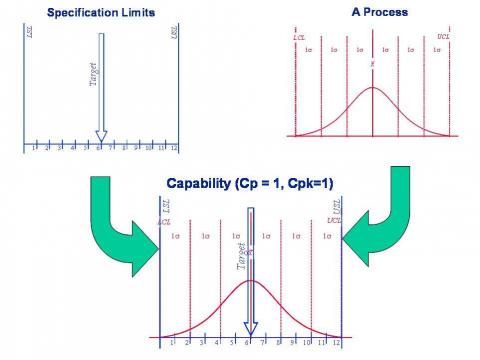 This is not a bad place to be. It beats many of the alternatives. You could, for instance, have an unstable process—you can’t manage it because you can’t say anything about what it might do. It also beats the incapable states depicted in Figures 2 and 3.3 In Figure 2, the specifications are only four sigma wide, so you can predict some percentage of output either smaller or larger than specified. In Figure 3, the specifications are still Six Sigma units wide, but the mean has shifted, leaving 2 sigma hanging outside the lower spec. So it’s not bad—in the Figure 1 case, we can predict that we will continue to meet customer specifications almost 100 percent of the time, as long as the process remains stable and we don’t let the mean shift. 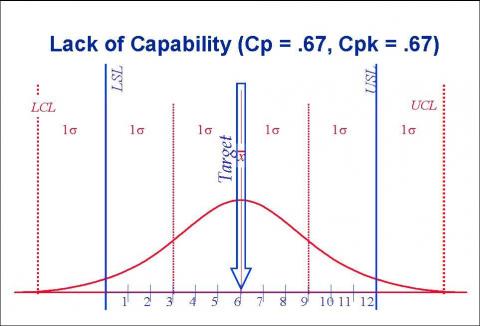 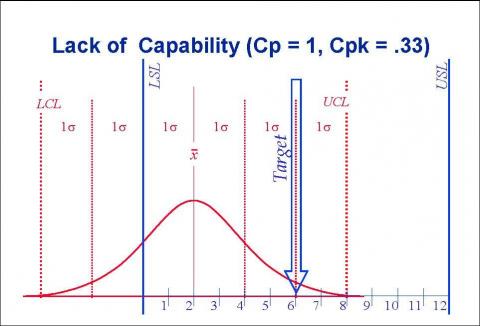 Figure 3—Lack of Capability (Off -Center)

The Figure 1 case does have its limitations, though. It is a little like driving down the highway between concrete construction barriers that are placed an inch or two wider than your vehicle…you can continue to drive without damaging anything, but you have to be very careful. It’s much better to have some more elbow room, some safety room. In Figure 4,4 we have what you might call idealized Six Sigma quality…the process mean is centered on the target value, the sigma units are one measurement unit wide, and so there are six sigma units from the process mean to the nearest specification limit. In this case, we have a predictable process that uses half the customer-specified tolerance. As long as the process remains stable, we will be very unlikely to see any non-conforming product or service. (Two occurrences out of a billion; 3.4 out of a million if you factor in the Motorola 1.5-sigma undetected shift.) 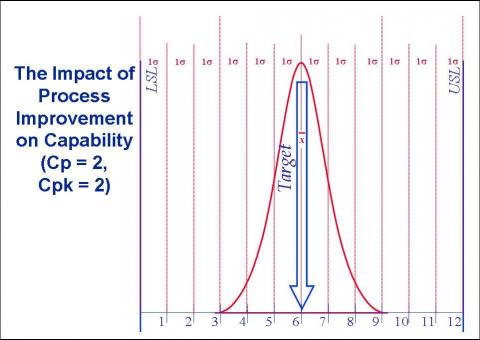 This case also gives us what has come to be called the "area of robustness" illustrated in Figure 5.5 In Figure 5, the variation has not changed, but the process mean has shifted to two sigma units above target. Since our specification limits are still 12 sigma wide, though, the nearest specification to the mean is still four sigma units away. Therefore, we still have a very small probability that any out-of-spec output will happen. Increasing elbow room obviously has its advantages. (Click on diagram to enlarge.) 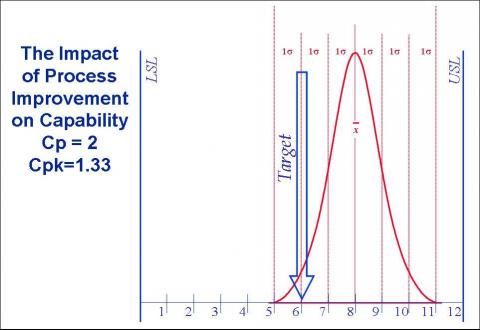 In the first segment, we introduced the Taguchi Loss Function. The idea that there is some loss as we move away from the target value toward one of the specifications is no mystery to anyone who has worked with tolerance stack. Taguchi’s concept has some far-reaching implications for quality, though; consider the two cases6 in Figure 6.

In the left hand side, distribution A is from the Figure 1 case, distribution B is from the Figure 4 case. With B, almost 100 percent of the output is produces with virtually no loss, with around 70 percent produced at almost zero. If you have A, around 70 percent of your output will be produced with the same loss as all of B; with some in the tails approaching very significant loss. On the right-hand side, the variation is equal, but the mean has shifted. In this case, most of the output is coming from an area where the curve is growing; very little is produced at or near zero-loss. In this case, operating in the "area of robustness" generates considerably more loss than operating on-target with more variation, as in distribution A.

So the Taguchi Loss Function concept suggests that yes, we need to always reduce variation; but we also need to get the process on target and keep it there. It answers the question, "What do I work on first?" Of course, first you have to get the process stable; once that’s done, get it on target and keep it there while you continually work to reduce the variation. (Click on diagram to enlarge.)

Summary of the Exploration of Process Capability Concepts

Continue to part 4 of this series.