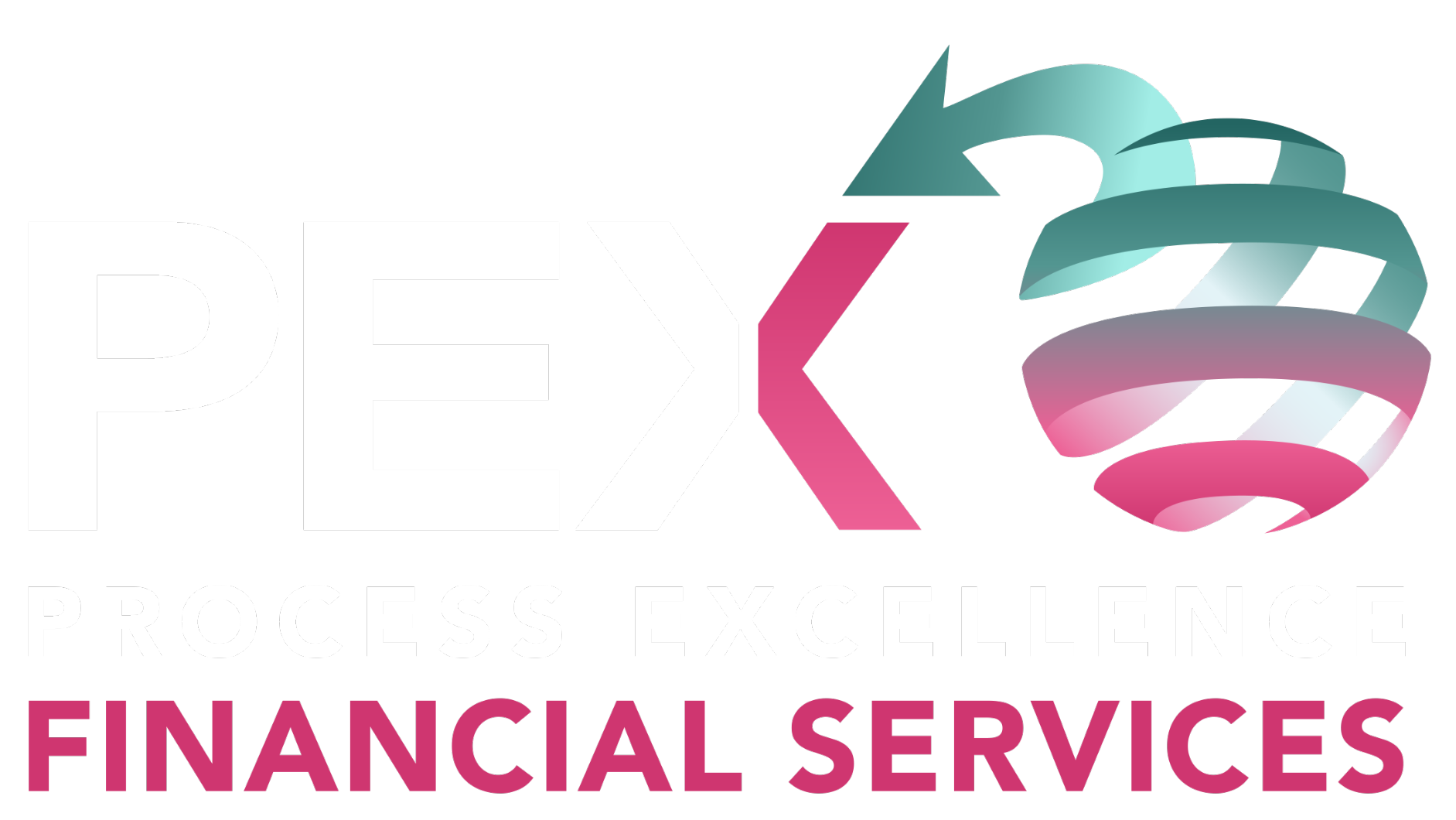 A better way to manage your DMAIC projects

I became a Black Belt in 1999 for Bombardier Aerospace, based in Canada. 3 years later I was a Master Black Belt for the Railway arm of Bombardier, this time in the UK. 2 years later, in 2004, I was Director of Sigma and Integrated Process for the European Services division of Bombardier Transportation. Then followed 8 years of leading Lean Six Sigma deployments for various companies with equally varied job titles: VP Six Sigma at Metronet, Director Process GMAC, LSS Deployment Leader at Ecolab...

12 years in the amazing field of continuous improvement. So many joyful moments, yet so many frustrating ones as well. Pretty much up there in terms of the most frustrating moments is the control of the DMAIC methodology and the management of all project files in an efficient and robust manner.

But not only the 'control of a DMAIC project was my concern, as equally important a topic for execution and archive purposes was the question of "Where do we save the Black Belts project files?" Personal Black Belt drives? Common drive? SharePoint site?

Valid and workable approaches however I always felt they were 'disconnected' approaches in the sense that this file management was not really 'integrated with the DMAIC methodology.' So, despite SharePoint being the most popular solution back in the days (and still today), I always preferred using a common drive as it allowed for an easy setup of a DMAIC structure in a folder and sub folder type approach. A typical folder structure would look like this: 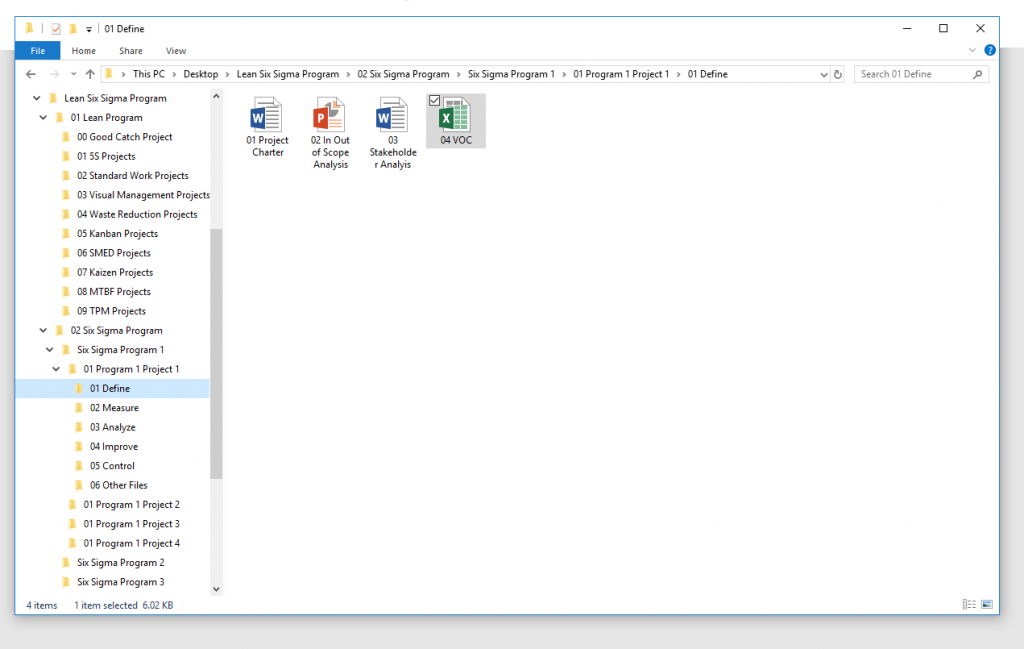 I would have a folder for the Lean Program. it would typically contain the following 10 folders (but I will not expand on this today, maybe in another article if there is enough interest):

A few of the Black Belt projects would be 'just-do-it' projects, however the majority of projects assigned to Black Belts would be DMAIC projects. A classic example of a Six Sigma program we led in a Supply Chain organisation was 'Improve Customer Satisfaction.' Many projects were assigned to this task, one example is 'Improve On-Time Delivery for the UK market.'

As you can see in the first screenshot, under program 1 I have 4 projects. Under each project I would create a folder with 6 folders, one for each step of the DMAIC methodology and 1 for other files. The Black Belt could do whatever she/he wanted with folder 06 but content in folders 1 to 5 was limited by the templates requested for each of the DMAIC steps. As per that screenshot for example, that meant for the Define phase we could only see:

The same approach would obviously be adopted for all the other steps of the DMAIC methodology. The Measure folder would have the SIPOC template, the Fishbone template, the Leading and Lagging Indicator file, the guage R&R, etc.

The challenge of managing DMAIC projects with traditional tools

The challenges were numerous. To name a few:

As SharePoint grew in usage, I eventually use it but apart from improving sharing between sites/countries/regions, the problems above remained.

In i-nexus continuous improvement solution, when you assign a project to an objective, you can pre-set the project methodologies. In the example below, I am assigning a new project to Annual Objective 1 (AO1 - in green). I want that project to be following the Six Sigma DMAIC methodology and so I select that in the 'New Project' sub menu: 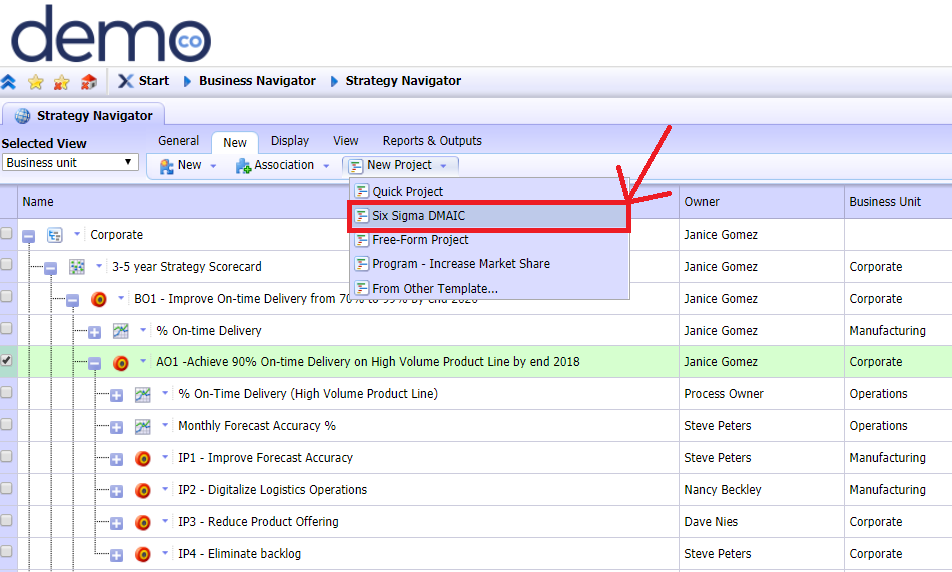 This takes me to the Project Wizard screen where I can enter all the basic information about this project: 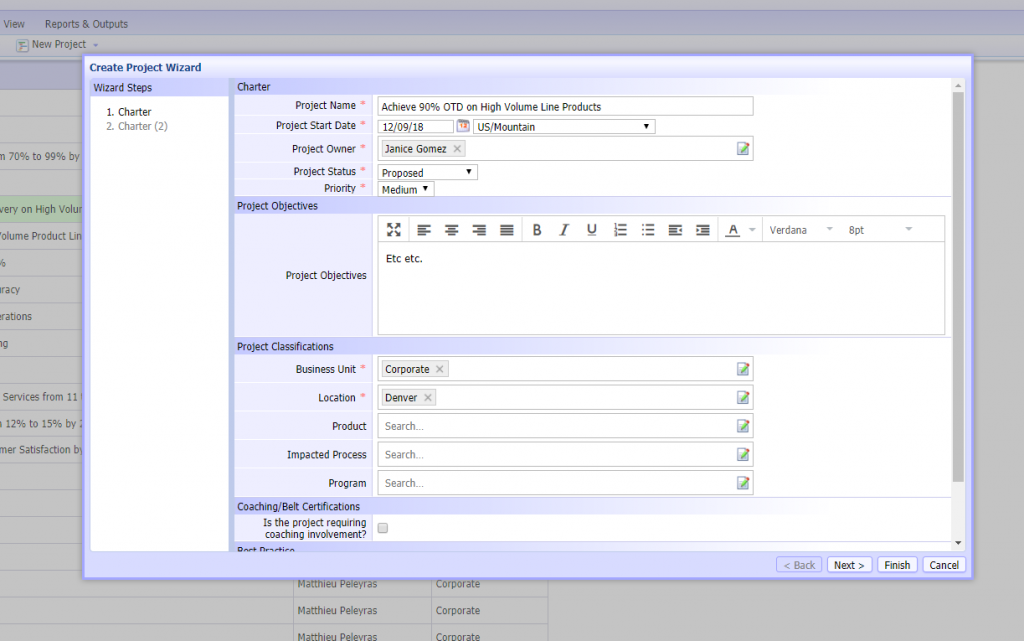 Once the basic project information has been entered, the project will appear under the objective: 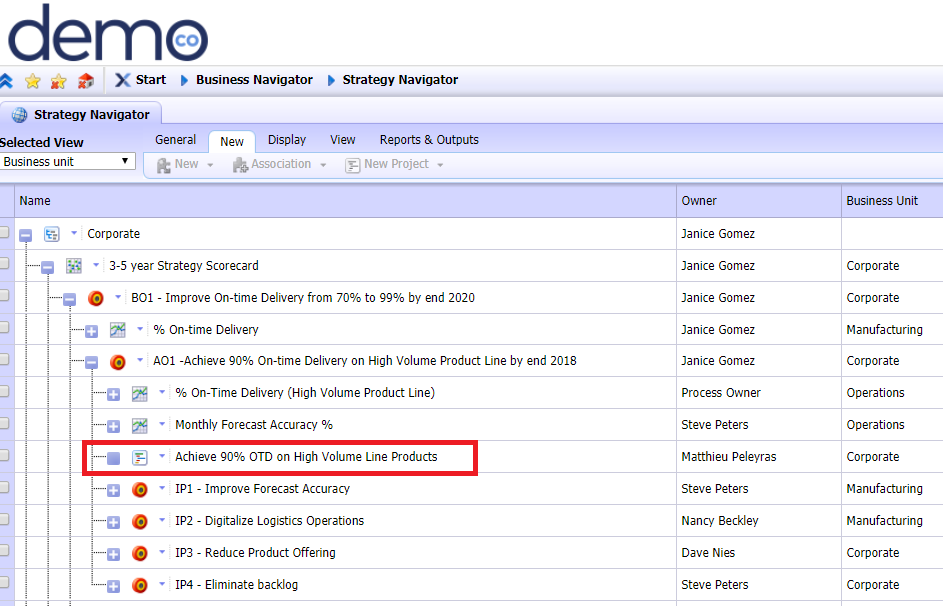 Already, as a Deployment Leader I like the fact that my project is associated to the annual objective which in turn is connected to the Breakthrough Objective BO1, i-nexus allowing you to visually connect all your objectives with your KPIs and projects.

What I will do now is click on the drop-down menu option next to the project title. This will give me a comprehensive list of project management functionalities like Project Charter, Journal Entries, Financials Tracking, Resources Management, etc. However what I will show you now is the Schedule functionality for this selected DMAIC project:

This takes us to the DMAIC methodology assigned to that project:

We can see that each of the phases of a DMAIC project are presented, each one showing content for the phase in question. To show how this is structured I will open the Define phase and see what steps we have included as guidelines for that phase. 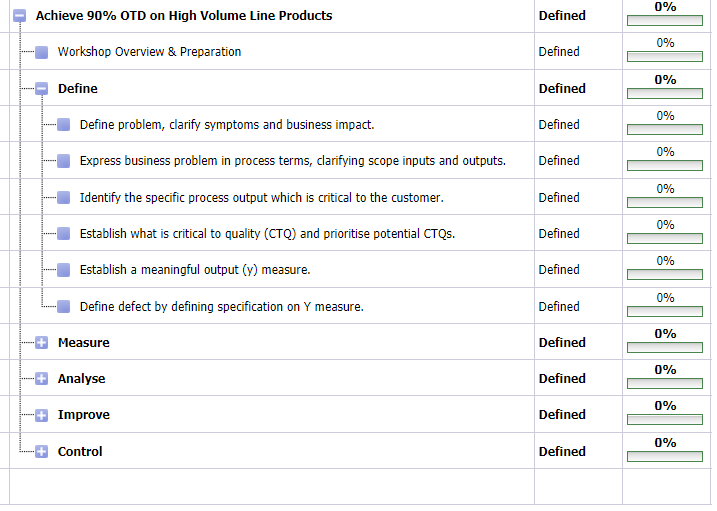 Every single template comes 'attached' to the methodology so every time a Black Belt selects 'Six Sigma DMAIC' as a project, all the templates you want your Black Belt will be attached to the relevant step where the template must be used.

In the example below, the SIPOC template has been completed and so it is saved in the Document column, as opposed to the VOC template sitting in the 'Document Template' column hence not completed yet:

Moreover the completion of the templates can be done directly in i-nexus: you can open the file directly in the software, modify it, save it and upload it in the 'Document Completed' column.

Any type of file can also be added to any of the steps. Here for example you have an image that has been added to step 1.4. From this project screen, you will notice that we can access all aspects necessary to execute projects. The menu highlighted in red below shows that you have access to:

The templates being attached to the steps of the methodology this will increase the likelihood that Black Belts will use this tool to save their files rather than keeping them on their hard drive. Finally, the management if files could not be easier: in the document template column you attach all the files you want your Black Belts to use. Once they have saved their file and uploaded it in the column template, it means the file has been updated.

Those templates are attached to the specific steps of the methodology they relate to. To have a helicopter view of all the files in a project however, a Black Belt can simply click on 'Document' and see all his/her files in one screen:

Here is a video demonstration of the DMAIC project management functionality of i-nexus strategy execution software.

Thank you very much for reading this article and I wish you the best of success in the execution of DMAIC projects.