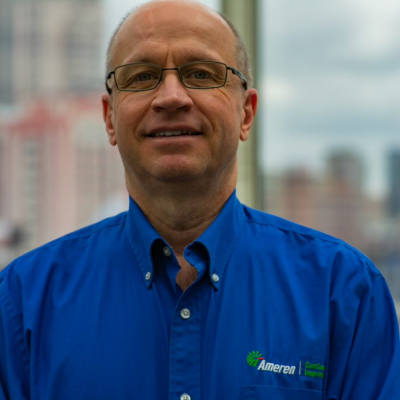 Mike Faller is a Senior Continuous Improvement (CI) Engagement Manager at Ameren Corporation, an electric and gas utility in Saint Louis, Missouri.  In his role, Mike is a member of a team of CI professionals responsible for guiding the business on their Lean CI journey.

Since joining Ameren in 2014, he has worked with much of the organization to implement Lean CI.  Current areas of responsibility include Power Operations, Nuclear generation and Corporate Safety.  Previously, he led the Lean CI rollout in Business and Corporate Services, which includes IT, Supply Chain, Facilities, HR, Finance and other departments.

Mike started his career as a Machinist, later earning a Bachelor's Degree in Mechanical Engineering from Missouri S&T.  He has held positions as a Manufacturing Engineer, Quality Engineer and Supervisor, Six Sigma Black Belt and Master Black Belt.  Mike gained much of his CI experience working for Honeywell International, Ingersoll Rand and Wyndham Vacation Ownership, as well as other companies.

11:00 AM Explore different approaches to develop CI capabilities across the company

Check out the incredible speaker line-up to see who will be joining Mike.